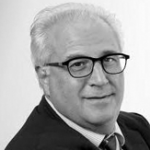 Konstantinos Macheras, President of the Institute of Retail Consumer Goods – GR and Former EVP of Delhaize Group & CEO of Southeastern Europe and Asia, was born in Athens, Greece in 1953, he is married and has one daughter.

He started his professional career in the Retailing area in the U.S.A., as a Purchasing Manager in the Quality Super Market company at Chicago.

He had been a dynamic executive for over 14 years in the Mars Inc., since 1982 in Holland- Marketing-Sales-Export Sales- as well as General Manager in Greece and Italy. He had also served as General Manager of Chipita International (1996-97). He was a member of the Board of Directors at EASE (Association of Greek Executive Officers) and 6 years of SEET (Association of Greek Food Enterprises). He is also a member of the Board of EEDE (Hellenic Management Association) since 1999 and member of the “Future Leaders Development Program” in Greece.

In 2005 he was named Officer in the order of King Leopold II by the King of Belgium Albert II.

In Αpril 2009 Konstantinos Macheras was nominated “Manager of the Year 2008” by the Hellenic Management Association. In 2009 was also nominated as “Retailer of the year” and in 2010 as the first CEO on CSR issues. In 2010 he was also awarded as the “Retailer of the decade”.