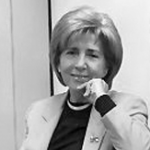 Litsa Panayotopoulos is Partner of Boston Hamilton, President of the Innovation, Education, Entrepreneurship Committee of the American-Hellenic Chamber of Commerce, Secretary General of its Executive Committee and General Secretary of SEN/JA (Young Entrepreneurship Association/Junior Achievement). She is a Member of the Advisory Board of PJ Τech Catalyst Fund (Piraeus Bank), Board Member of IOBE (The Foundation for Economic and Industrial Research), honorary member of EASE (Association of Chief Executive Officers), Board Member of the Greek-Serbian Business Council and Citizens’ Movement.

Litsa is involved in the development of new markets/areas for innovative companies and is also active in organizational development alongside CEOs and boards of directors cooperating with them to turn their business strategies into action.

Her career has been built in large and complex international systems and projects in the USA, Europe, the Middle East and Africa. In Greece, she developed and ran Geranos SA, a subsidiary of Commercial Bank of Greece; she then took on the establishment and development of Oracle Greece S.A. as President and Managing Director. She expanded Oracle in S.E. Europe and Cyprus by establishing and running 13 subsidiaries of Oracle Corporation. Litsa developed and managed OTE Academy which shaped the educational activities of OTE (Hellenic Telecommunications Organization) into an advanced educational center for building world-class skills. This led to cooperation of the World Bank in Educational Projects in multiple areas for all the Sub-Saharan African Countries in English and French, and the future expansion in the former Soviet Union countries.