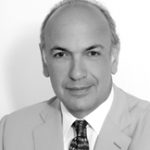 Joined S&B Industrial Minerals Group in 1998 as COO and became the first non-family CEO in 2001 until 2011. Served on the Board of Directors for 15 years.

Earlier in his career, Mr. Vidalis spent 20 years at Owens Corning, USA, where he held several leadership positions including Vice President of the European Reinforcement business (1986 to 1993) and President, Composites and Insulation (1994 to 1997).

Currently serves on the Board of Directors of ALPHA BANK, of TITAN CEMENT S.A. and FAIRFIELD-MAXWELL Ltd. (U.S.A.)

He is also the co-founder and advisor of  Zeus Capital Management.

He serves on the Board of Solidarity Now in Greece and ALBA Business School.

Recently elected President of the Executive Committee of SEV -Hellenic Federation of Enterprises during the Annual General Assembly, held on June 15th 2020.

He was a member of the Board of the  Hellenic Federation of Enterprises (Vice Chairman & Secretary General) from 2006 to 2016, Chairman and founder of the Business Council of SEV for Sustainable Development-Greece from 2008 to 2016 and Chairman of the Greek Mining Enterprises Association (SME) from 2005 to 2009.

Holds a BA in Government from Harvard University and an MBA from the Harvard Graduate School of Business Administration.