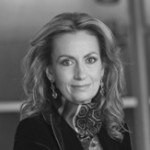 Vice President of the Foundation of the Hellenic World, Head of Cultural Center “HELLENIC COSMOS”

Ms Sophia Kounenaki-Efraimoglou has played an important role in the management of companies in the sectors of Communication, Trade, Industry and Portfolio Management as president and CEO, among which the telecommunication company Vivodi Telecom and Fortius Finance S.A., which she founded.

At the same time, Ms Sophia Kounenaki-Efraimoglou is Member of the Board of Directors of the Hellenic Federation of Enterprises (SEV) and of the Athens Exchange Group (ATHEX GROUP). She is Vice President of the Hellenic Corporate Governance Council, a joint initiative of ATHEX GROUP and SEV. She is an elected Member of the Board of Directors of the Athens Chamber of Commerce and Industry and responsible for Turkey in the International Relations Department. She is also the Vice Chairman of “Technopoli-Acropolis” (ICT Park) and Treasurer of the E.B. of ALBA (Athens Laboratory of Business Administration). Moreover, she is a Member of the Advisory Board of the Institute on Economic Policy and Public Governance of the American–Hellenic Chamber of Commerce. With genuine interest in Hellenic culture and as Vice President of the Foundation of the Hellenic World and Head of Cultural Center “HELLENIC COSMOS”, Ms Sophia Kounenaki-Efraimoglou plays an important role in the preservation and dissemination of our cultural heritage.

She holds Bachelor and Master Degrees in Philosophy, Psychology, Business Administration and Computer Programming and is fluent in English, French and Italian. Ms Sophia Kounenaki-Efraimoglou is married to Mr. Dimitris L. Efraimoglou and is mother of three children.