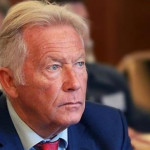 The 2nd C-Suite Series lecture of this academic year will take place on Thursday, 27th of February 2020. The lecture will be conducted by Mr. Yannis Bassias, President and CEO of HHRM S.A. (Hellenic Hydrocarbon Resources Management) on the topic ’Beyond the chase of Hydrocarbons in Greece’.

Mr. Bassias has 30 years experience in the international oil and gas exploration. Since November 2016 he is the President & CEO of HHRM (Hellenic Hydrocarbon Resources Management) the state company managing and supervising the oil & gas exploration and production projects in Greece. From 2012 to 2016 he advised several companies in EEZs of the Indian Ocean, Equatorial America and West Africa on geological and legal aspects of frontier hydrocarbon basins. From 1997 to 2012, as president of Georex group, when he demerged the exploration assets from the service activities and established technical subsidiaries in France, United Kingdom, Tunisia and the Republic of Congo. Managed database projects on CIS reservoirs, data mergers for Total, PetroFina and Elf, seismic data transcription for Snpc and Esso. Between 1996 and 2000 he directed evaluation teams for the development of oil and gas interests in Texas and Colombia. Before joining the petroleum industry, Mr. Bassias had an academic career at the Free University of Berlin and was also Associate Professor in the National Museum of Natural History in Paris.