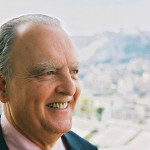 It is with profound sadness that we announce that Professor Charalambos Vlachoutsicos is no longer with us since 5th August 2020.

Charalambos Vlachoutsicos was a business manager and entrepreneur for many years. He had received a B.A. in Economics and Sociology from Bowdoin College, an MBA from the Harvard Business School and a Ph.D. from the University of the Aegean. He had also been teaching, consulting and publishing extensively on managerial issues and issues connected with strategies, policies and methods for planning, negotiating, establishing and operating investments.

He was the co-author of the book “Behind the Factory Walls, Decision Making in Soviet and American Enterprises” (1990), which presented the results of a research on Russian managerial principles and practices. The research was co-directed by Prof. Vlachoutsicos, as Fellow at the Russian Research Center of Harvard University and Senior Research Fellow at the Harvard Business School, and Harvard Business School Professor Paul Lawrence.

Prof. Vlachoutsicos also served as a Special Advisor at the Hellenic Foundation for European and Foreign Policy and as a Senior Fellow at the International Centre for Black Sea Studies. In 2002 he was invited by Prof. Gregory Prastacos, founder and then Director of the MBA International, to develop and teach the course “Doing Business in the Balkans and Black Sea Region”, for which he received the Teaching Excellence Award in the academic years 2002-2003 & 2005-2006.

He also developed another course with special focus on western investments in Turkey, “Doing Business across cultures: The case of Eastern Mediterranean”.

In 2007, Prof. Vlachoutsicos decided to bring his valuable consulting, managerial and executive board experience into the classroom by creating and successfully teaching the course “Establishing and Sustaining Effective Managerial Interaction” for the next eight years, and continued to take a keen interest in the teaching of the course until it came to an end in 2019. The purpose of the course was to teach his long experience in how to achieve effective interactions within the business environment. Students always appreciated that Prof. Vlachoutsicos talked more as a practitioner than as an academic, something that was also mentioned by Professor George Ioannou (former Director of the MBA International) in the prologue of Prof. Vlachoutsicos’ latest book “Getting Across to Get It Done”:

“Vlachoutsicos is managing to combine both worlds – his vast experience in real-life projects spanning the globe both geographically and politically (examples from the former Soviet Union and the Eastern bloc countries, or from New York on the other hand, can be found throughout the book), his Harvard education and his multi-year involvement in teaching MBA-ers on how to become leaders, is a fact that is proven again and again throughout his book…”

In January 2020, Prof. Vlachoutsicos was awarded at the 20th Anniversary ceremony of the MBA International Program for his outstanding contribution to the Program.

The MBA International community offers its heartfelt condolences to Professor Vlachoutsicos’ family, friends, students and colleagues. He will forever be remembered for his continuous dedication and support to the Program.