Launching a start-up of any kind is very challenging by nature. Imagine now attempting to establish a venture with an international footprint from day one. In this essay I will try to share the experiences and challenges that literally a “band of brothers” faced (till now…), during the conception and creation of our venture Toorbee.

Just a few words about Toorbee.

Toorbee is a B2B Fintech – Traveltech Company that focuses exclusively on the rapidly growing demand by the Chinese OTAs (online travel agencies) for in destination services and Chinese online payment solutions in Europe.

What we do as a company is not the focus of this article, but rather how we came to the point of starting a business in China from Greece and the challenges we faced. And this I think is a much more interesting story!

Our company was founded by myself and my brother George. We both have an entrepreneurial background, having worked initially in our family business that was in the fashion sector. Working together in a typical Greek SME was our starting point, where we learnt how unfriendly the Greek business environment is for entrepreneurs, let alone for start-uppers. Since then we have launched and exited several other ventures in renewable energy, online marketing and tourism. All our ventures would never have been realized without the help of the networks we have created, largely with friends we made during our studies.

In the troubled Greece of the last ten years, launching a cross border start-up was extremely difficult. Let’s not forget that only a small percentage of start-ups worldwide survive the first two years, let alone from Greece. It is extremely important for business ideas that are emerging in Greece to be internationally oriented and target large markets. Finally, if the business plan is well executed and it makes sense, the chance to find angel investors or VC funding is quite possible. However, the Greek start-up ecosystem remains at a very premature stage and is extremely shallow, both in terms of resources, as well as experienced and serious people. The best strategy I think is to always look outside since unfortunately Greece is a very small market.

Coming both from business backgrounds, we recognized from the very beginning the dynamics of the Chinese economy. So, we began to travel to China, constantly seeking business opportunities there. It would not be an exaggeration to say that in the last nine years that we have been traveling to China we have stayed there for close to two and a half (in total). It was not long before we realized that it was very difficult for Chinese tourists traveling overseas, and especially to the West for vacations, to find services and solutions tailored to them. The Chinese tourist is a special and difficult consumer category. While he or she wants and is able to consume, the lack of ‘China-Friendly’ solutions prevent them from doing so.

Unlike the western world, China operates under other conditions because of its culture and society structure, and that is what makes it a very difficult arena for businesses in Europe or the US to succeed, as they do elsewhere. China is, above all, a networked economy, so it is important to spend a lot of time there to get to know the local environment, build relationships, build your reputation and, of course, find the right partners. Unless this happens, the chances of any business venture to succeed there are very low. So, we decided to create Toorbee, which is the technological bridge between China and the West, linking B2B service providers to the destination with China’s largest online travel platforms and Chinese traveler spending.

The first people we shared our idea of creating Toorbee with are two Chinese friends (who were both our first “angel investors”). One is Baidu’s Chief strategy advisor (the Chinese google) and one of the top 20 personalities in the Chinese technology environment. The second is one of the most active investors in China’s Venture Capital segment. Her I like to emphasize that without their valuable help at all initial steps of this project, it would have been literally impossible. Hence the utmost importance of building relationships before launching a bigger venture in China. 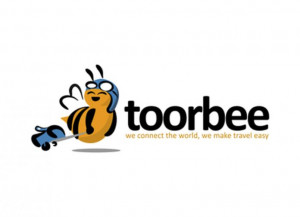 Toorbee was founded in late 2016. The story behind choosing our company name has a funny but also practical aspect. After we decided and determined what the company’s activity would be and its purpose, we had to name it somehow. We wanted to have the words “bee” (the hard-working bee) and “tour” (characteristic of our activity). At that time the .com domains on the word “tour” were priced around $ 2,500 so we preferred www.toorbee.com which costed $ 9.50 because it is the business that makes the difference and not the business name after all (some examples… Google, Airbnb, etc.).

Toorbee won an award for the most promising business idea in China in December 2017. The competition was held in the Yuhang Economic & Technological Development area in Hangzhou City, Zhejiang Province, which is the “Silicon Valley” of China. Toorbee competed among 700 companies and was the only non-Chinese company to participate. After three competitive rounds, presenting Toorbee’s business plan as well as new technologies we develop for the tourism industry, we were awarded the Most Promising Project Award from China. The twenty-member jury consisted of businessmen, investors and government officials.

Two phrases that represent and express our business culture are the following: “Big companies are made by their people, collectively and not individually” and “We always hire better-trained people than us in order for them to tell us what to do and not the opposite”. Our biggest investment is the sincere human relationships we have developed over the years, and without them we would not have been where we are today. Because by the end of the day everything is people.

Our vision is to make Toorbee the bridge that will bring Europe and China together and connect the two cultures. A bridge that will make the European offering ‘China-ready’ so that when a Chinese traveler arrives in Europe, they will find a ‘China-friendly’ environment.