Discussing with Salim Ismail, a serial builder of disruptive digital companies, about his experience with Yahoo, where he was the head of innovation, running their incubator Bricusse, he shared what was one of the most fundamental lessons he had learned: Only a few attempt disruptive innovation.

It seems that in any organization or institution, large or small, the immune system of the company attacks any attempt to change. And this is because virtually all organizations are built to resist change and withstand risk. And yet change is the highest need and order today.

When Salim Ismail stopped working with Yahoo, and became the founding Executive Director at Singularity Group, an executive training, incubation, and innovation consultancy provider, where, for three years, he led most of the training programs, the challenge was even bigger and the learning quite profound. At Singular, they would have CEOs, investors, and government leaders come for one-week programs and they would say, “I get it, okay, I get the disruption. But what do I do on Monday when I get back to the office?”

So, how do we practically apply change? How can you accelerate thinking and increase the metabolism of your organization to match what’s happening out there, in the world today? Because, undoubtedly, we all see radical changes happening.

This is what I will cover in the new MBA International elective course “Leadership in an Exponential World” that will be introduced from the next academic year. We will delve into the set of leadership approaches and the methodology needed for increasing organizational metabolism.

Most of us are familiar with Moore’s law. The doubling effect of price performance of computation, which we have experienced during the last 40 years. However, Ray Kurzweil took the challenge to look back in history and observed doubling patterns since 1900! Kurzweil’s graph looks at the pace of change of Moore’s law. This has been called the most important chart in the history of mankind by Steve Jurvetson, an early investor in Hotmail and currents SpaceX board member. According to the graph, we’ve actually been doubling the price performance of computation for over a hundred years, way before Gordon Moore made his predictions. 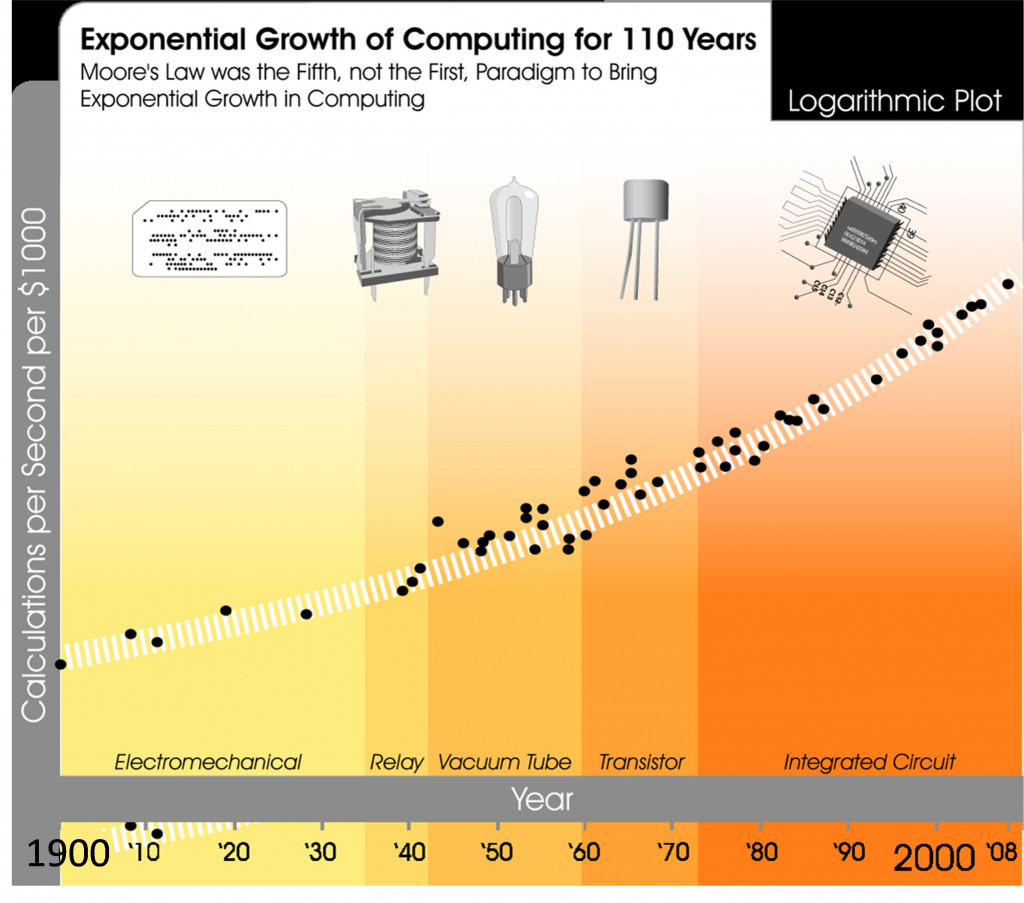 Despite wars and recessions, and ups and downs in industry and economy, the curve has remained smooth and predictable. One would expect a very jagged, stock market type of shape. But no, this is a very steady, rhythmic progression that we see here.

Puzzled by this, Ray Kurzweil spent a full 10 years researching the phenomenon, trying to understand why this curve is so smooth and so predictable. Eventually, he came up with a really fundamental observation. If you take any domain discipline, industry area or product area, and you power it with information technologies and it acquires informational flow properties, its price performance starts doubling very steadily anywhere between a few months and two years.

Most importantly, once that doubling pattern starts, it does not stop, it just keeps going. And that is very hard to get our heads around. In their book “Abundance” (1), Peter Diamandis and Steven Kotler chart out that if you can harness this pace of change, we would be able to achieve abundance of healthcare, education, clean water, and clean energy in a relatively short period.

Now, what could the world look like if that’s the case? The main challenge is to shift our thinking from linear to exponential. We are cognitively bad at seeing that pattern, while we’re really good at linear extrapolation. This is because most of our training and education teaches us about linear patterns. It’s quite obvious to all, that if I take 30 (long) steps linearly, I’ll walk 30 meters, one, two, three, four, and so on. Hence, at the end of that 30-step progression, I’ve advanced 30 meters. However, if I take 30 doubling steps, two, four, eight, 16, 32…, and do that 30 times, at step 30, I’ve “walked” more than a billion meters, which is actually 26 times around the world. A little further than 30 meters, obviously! This is all what exponentiality is about, but it’s a growth pattern, a pace of change, very difficult to spot, predict and embrace.

Nowadays, as the world is driven by information, we are seeing more and more domains pass into this exponential pattern, which, however, as I said before, is very hard get one’s head around. When we apply this to industries, we typically see things in three layers. The dominating thinking across business history has focused on business models where revenue creation and value creation come from the sheer physicality of the world. We extract resources, we process raw materials, we assemble components, and we ship things around. In history, almost everything in terms of value creation has come from that bottom layer.

Then we added a second layer, which can be represented by Kindle or the iPhone where the product might be physical, but revenues are dominantly digitally driven and information based. At an increasing pace, we now see industry after industry move up that stack. For instance, Tesla it’s not really a car with computers and sensors in it. It’s a computer with wheels, right? Well, you perceive a car very differently when you think of it that way.

However, Tesla as a computer on wheels might still be an erroneous conception! Remember that a Tesla updates itself every few weeks. So, maybe you have to think of it as an app that has wheels! This is the third layer; with the rise of mobile, cloud, machine learning and AI technologies we now have entire industries that are completely digital with almost no physical manifestation at all, or with the physical manifestation being subordinated to the digital.

This might boggle your mind, but you can see the directionality of this and the potential for exponential, not linear, growth. As we “information-enable” the world, entire industries and ecosystems start to accelerate on their development path. The winners will be those that embrace this very different view of the world, and acts upon it business wise.

We have already entered a world that needs different thinking frameworks and different leadership approaches and skills. It needs an exponential leadership framework!

So, come and join us in the new MBA International elective course “Leadership in an Exponential World”!