i-MBA > Alliance for Innovation and Entrepreneurship

The results of the collaboration of i-MBA with MSD and ID – GC during the last two years were presented in a press conference that took place on March 30, 2015 at the Office of the European Parliament in Athens. Mr. Kostas Fotakis, Deputy Minister for Research and Innovation, as well as the Rector of AUEB, Professor Konstantine Gatsios were there to acknowledge this public-private partnership that promotes innovation and entrepreneurship. 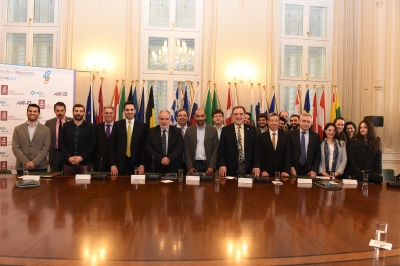 Back in May 2013, i-MBA launched a new collaboration with the NGO ID-GC to advance the curriculum offered at the Innovation & Entrepreneurship major of the Program. MSD, the global healthcare leader, in its quest to continuous supporting innovation and research, joined that partnership and offered 10 scholarships to applicants for this particular major for the academic year 2013-2014 and 12 more scholarships for the academic year 2014-2015.

Scholarships were open to candidates with innovative ideas resulting from academic research, or entrepreneurs in the first stages of designing or developing new business, having the potential to become industry disruptors and game changers with global reach. The aim of that initiative was to provide recipients of the scholarships with all necessary technical, business and personality skills and knowledge that would help them turn their research output or innovative idea into a successful business venture.

In addition to the formal criteria for admission to the program, the value proposition of the business idea of the candidates, their research activity, the awards they had received, their leadership and entrepreneurial potential, personal motivation and interpersonal skills were also evaluated and taken into account for the final selection.

As a result of this collaboration, 9 start-ups have already been established. All students have completed their business plans and have participated in a number of competitions, networking events and other initiatives, organized by the University and/or other partners, to promote their ideas, get funding, build their teams, etc.

Deputy Minister, Kostas Fotakis, who addressed the conference, noted the importance of research for the reinforcement of education and culture and said that one of the major challenges for the years to come is to find ways to leverage research to achieve development.

Professor Konstantine Gatsios, Rector of AUEB, stressed the importance of this collaboration and aligned its results to the four major pillars of AUEB’s strategy (Openness, Innovation, Excellence, Value to Society).

During the event (which was also addressed by Professor George Ioannou, i-MBA Director; Professor George Doukidis, Director of the Innovation and Entrepreneurship Unit of AUEB; Mr. Haseeb Ahmad, Managing Director of MSD Greece, Cyprus and Malta), scholarship students had the opportunity to present their business ideas.

To read the full press release (in Greek), click here.

The collaboration was showcased by ANT1 News.

To learn more about the collaboration, watch this video.

A few words about MSD

MSD (Merck Sharp & Dohme) was launched in Greece in June 2010 and it currently employs more than 230 employees. It is the Greek subsidiary of Merck & Co, Inc., the second largest pharmaceutical company in the world. Known as MSD in Europe and Merck in the United States and Canada, the company discovers, develops, manufactures and markets a wide range of innovative pharmaceutical products to improve human health and employs 82,000 employees in 140 countries around the world.

Industry Disruptors – Game Changers (ID – GC), are an initiative aiming at the creation of an ecosystem, which strengthens and promotes innovative entrepreneurship, focusing on start-ups and extroversion.

Through strategic partnerships with recognised international organizations that support entrepreneurship, ID-GC offers young entrepreneurs the opportunity to grow and mature their ideas through networking, competition, training, education, funding, mentorship and communication strategies tailored to the needs of a start-up business. For more information, visit www.id-gc.org