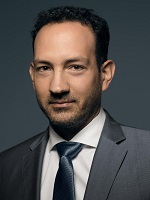 Evangelos works as an International Business Development Manager for E.ON, at the global headquarters in Essen, Germany and is responsible for supporting the business development activities regarding strategic as well as operational aspects in the sector of Photovoltaic (PV) Solar and Electric Storage across several European countries. He has 10 years of experience in the Solar Energy business, having previously worked in various roles in this sector in Greece.After having worked for 2 years in commercial roles for EPC companies in the PV sector, Evangelos captured the opportunity in the PV market in 2011 by starting his own business. By developing national sales and international procurement networks along with installation capabilities, he was able to successfully serve numerous customers for small and medium scale PV investments across the country. His response to the collapse of the Greek PV market in 2013, was the broadening of the business activities in the areas of Energy Saving and Smart Homes.

Evangelos holds a diploma from the Electrical and Computer Engineering School of the National Technical University of Athens, as well as the MBA international. Both at undergraduate and graduate level, he enriched his studies as an exchange student at the Technical University of Denmark (Copenhagen) and the School of Business, at Stevens Institute of Technology (New York metropolitan area) in the areas of Offshore Wind and Business Intelligence respectively. His academic skills have been enhanced by a series of certifications, including the Project Management Professional (PMP®) by PMI, the preparation courses for which were offered as part of the iMBA curriculum. Evangelos describes himself as a passionate traveller, a wine lover and a cellist in the making.